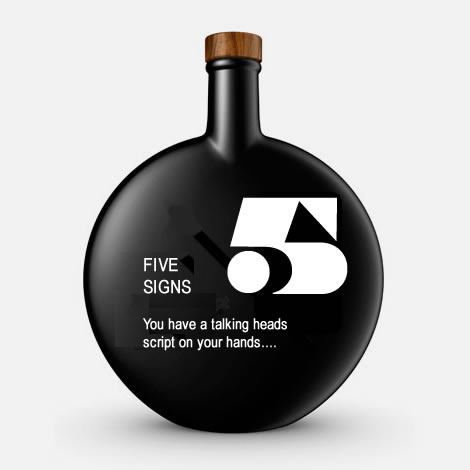 
1: TOO MUCH ACTION IS FAUX ACTION: Read scene description alone. If the majority of action descriptions refer to characters gesturing with their hands, looking up, looking down, looking sideways, looking at each other — or just plain “looking,” or making expressions, or shaking or tilting their heads?

That’s not action. That’s faux action. There is no big motion on the film screen. Just eyes and hands and chins moving almost imperceptibly.

That’s not giving a movie audience much to look at on a film screen.

In addition to not giving a movie audience much to look at on a film screen? Too much scene description describing faux action also drags down pacing in a read. And, if there is too much of it? Readers will start skipping past scene description entirely because repeatedly reading about heads and eyes moving wears readers out and nothing of import is happening in terms of action on the page.

2: TOO MANY CHARACTERS ARE SITTING DOWN OR STANDING STILL: Skim scene action. What are characters physically doing in scenes? If they are sitting down or standing still during the course of a scene, these characters are not in motion on a screen. Make characters move. And I don’t mean move their hands or eyes or make new expressions. I mean physical movement that will register on a movie screen as moving. Jogging around a track. Climbing a rock face. At the very least, walking down the sidewalk.

4: TOO MANY LOCATIONS ARE STATIC LOCATIONS: All scenes or a majority of scenes take place in small enclosed static locations. Get out a piece of paper and make two columns on it. Static. And Non-Static. Now skim those scene headers and put a check mark down under each column, depending on the location. Static locations are interior enclosed locations. Rooms in houses. Rooms in hotels. Offices. Bars. Restaurants. Cars. Subways. If the majority of checks are showing up underneath Static Locations? Things are going to be very static on the screen.

5: NO PHYSICAL INTERACTION IS HAPPENING BETWEEN CHARACTERS: So, great, you’ve gotten characters moving, and you’ve gotten them outside at least some of the time, you’ve cut all that faux motion and introduced real motion on the screen like running instead of waving a hand about in the air. And characters have gotten off the phone and started actually talking to each other face to face. That’s a real good start.

Next question. Do characters physically interact with each other? At all? Or do they all exist in their own little bubbles of personal space, never breaching each others’ no fly zones?

In the same way characters being face to face with each other when they interact instead of talking to electronic boxes while alone creates stronger dynamic character interaction and scene tension?

If you aren’t even aware there are too many static scenes in a script? How can you use them to create screen tension? You can’t. You must be able to identify them in order to use them.